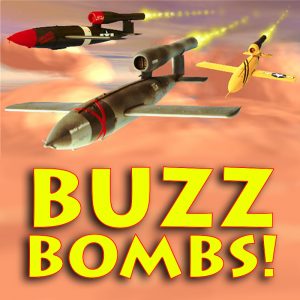 Originally printed for the now-out-of-production Pacific Monograph V-1 Buzz Bomb kit, we’ve got plenty of decals available at a bargain price. But first, the reviews are coming in:

Detail and Scale: “The range of color schemes here are very impressive and diverse …”

Cybermodeler.com: “This set will make your project stand out!”

This is the first decal sheet I have seen from this Hawaiian company, and I an quite impressed with their choice of subjects. The Ford JB-2 was also called KGW and LTV N-2 Loon. No matter the name, they were all reverse-engineered V-1 missiles that were developed in 1944, with over 1300 examples being used by the United States Army, Navy and Air Force.

The type was ground- and air-launched, just like its German predecessor. Two submarines, USS Cusk and Carbonero were also modified to launch the type from watertight containers on their upper hull.

The decals supply markings for nine Loons in a wide range of color schemes, from a simple overall drab green with a red front to to the pulse-engined JBs (something that is common on most of the options), as well as an overall white example with a red nose. We also have Navy-operated Loons in yellow and orange, most of which carry a selection of unique markings.

The instructions supply side profiles but do no recommend a kit, although to be accurate the only option is the MPM Ford JB-2, which can still be found despite being released over two years ago. You could also You could also convert any V-1 to a JB-2 or Loon by creating a new front pylon with a straight leading edge, rather than the angled version of the V-1.

* V-1/Ford JB-2 unpainted metal with a red cross on nose indicating a Trialen warhead. This example has a number of stencils in German, so may actually be a V-1.

This is a nice sheet, although on our sample the white was missing from the national insignia (a replacement sheet is included). This was not a major issue as I have a Funkdecal sheet that supplies replacements the right size.

If you are interested in this subject, visit www.pacmonoshop.com to order yours for a mere $4.95 US. I look forward to what is coming next from this company.